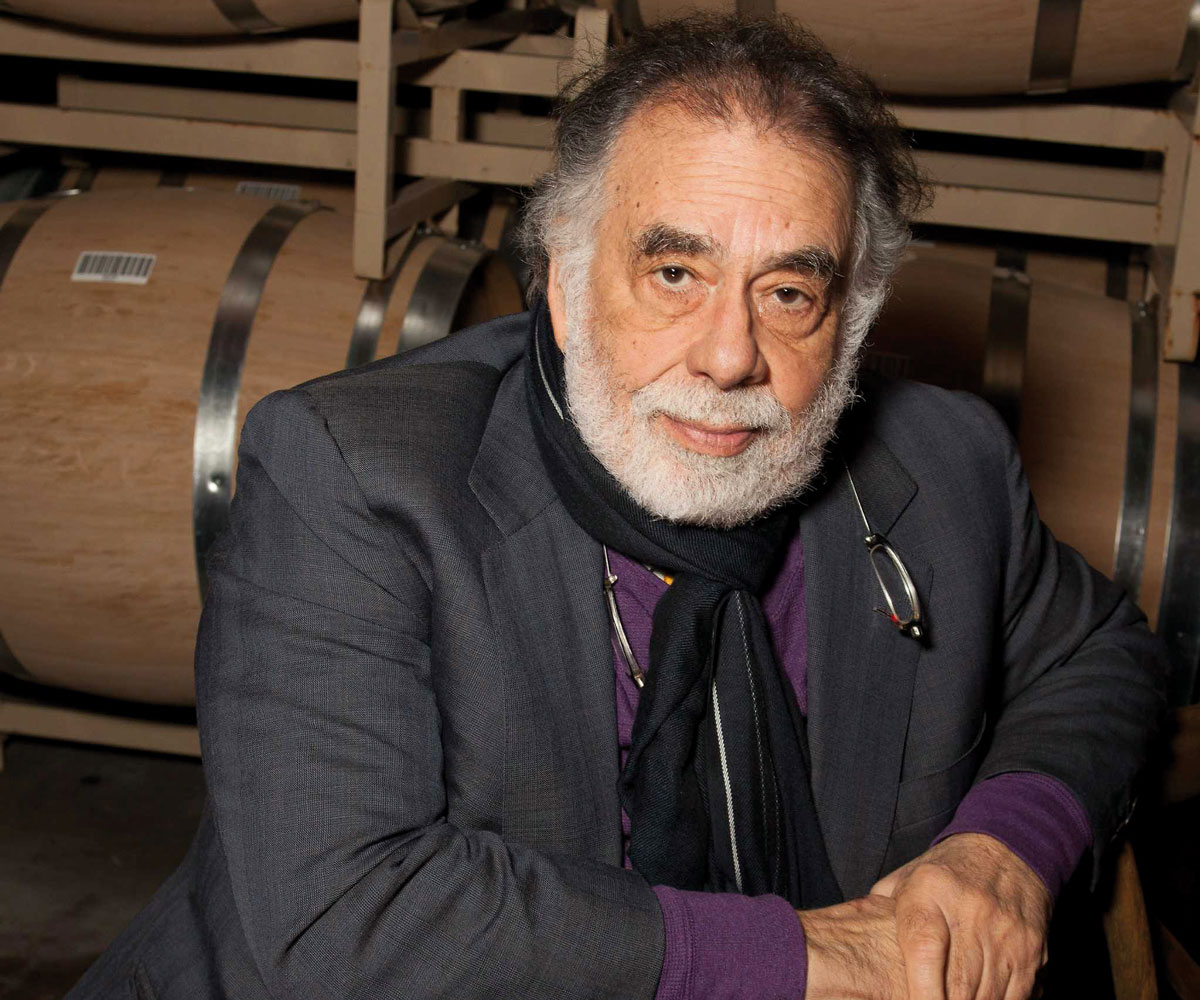 In 1979, director and cinema pioneer Francis Ford Coppola bought part of the formerly world-famous Inglenook Estate, which had been founded by Niebaum 100 years earlier.

Initially pursued as a hobby in memory of his grandparents, who had pressed wines in their cellar in the Naples region, Coppola embarked on a serious winemaking career in the mid-1990s – so serious, in fact, that his Francis Ford Coppola Winery is now the twelfth-largest U.S. wine producer. 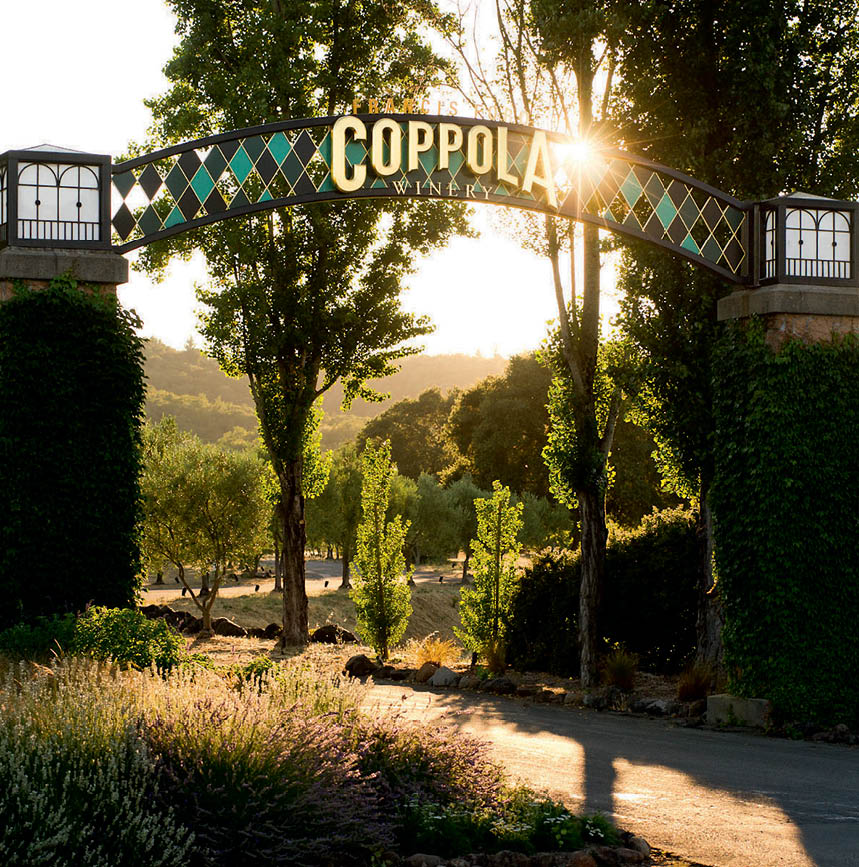 The Coppola wines are intended to be “everyday wines for everyday life”. But these wines are by no means simple Hollywood starlets. Francis Ford Coppola wines have a very personal touch, are powerful, perfectly balanced allround, long lasting and pleasantly mild.

All grapes for Francis Ford Coppola wines are certified organic.

After the success of his Napa Valley winery, Coppola sounded out the neighbouring Sonoma Valley in 2007, where he acquired the former Château Sovereign winery, expanded it, and created his Director’s Cut line of wines.

A powerfully complex wine with a classic flavour profile and youthful maturity. Debuted with the 2006 vintage, the first year our wines were produced at the Sonoma property.

Our Chardonnay reflects the distinctive personality of Monterey vineyards, which give rise to juicy apple, guava and melon flavours.  Whole-cluster pressing and a combination of barrel and stainless steel fermentation ensures that the creamy texture and caramelised sugar finish is balanced by a crisp acidity.

A vibrant California Merlot, displaying luscious plum and red raspberry flavours. Sourced from the same core of Merlot grape-growers since the premiere vintage in 1997.

APOCALYPSE NOW is a trademark and copyright of Zoetrope Corporation.

Our signature red wine, layered with flavours of blackberry, cassis and roasted espresso. Claret is a Cabernet Sauvignon-based wine, blended in the classic Bordeaux style. This Cabernet Sauvignon, Petit Verdot, Malbec and Cabernet Franc blend is alluring and sophisticated; it is memorably lush with a tapestry of smooth tannins and succulent flavours of wild berries, plum and anise.

Our Chardonnay reflects the distinctive personality of Monterey vineyards, which give rise to juicy apple, guava and melon flavours.  Whole-cluster pressing and a combination of barrel and stainless steel fermentation ensures that the creamy texture and caramelised sugar finish is balanced by a crisp acidity.


Tempting, easily drinkable Zinfandel with lively Californian aroma of fruit and spice, made for daily enjoyment. Its peppery characteristic creates a unique and complex taste profile.

Similar to Australia’s famed Penfold’s Grange, Eleanor is a robust red blend that combines fruit from both of the Coppola properties. Blending Syrah and Petite Sirah grown in Rutherford with Sonoma Cabernet Sauvignon and Syrah, we’ve created a unique bottling that is very long lived with exceptional depth and complexity. Beautifully perfumed with dramatic spices, our Eleanor offers a rich, velvety palate of jammy boysenberries, cassis and juicy plums enlivened by fragrant notes of black cherries, cloves, allspice and cocoa. 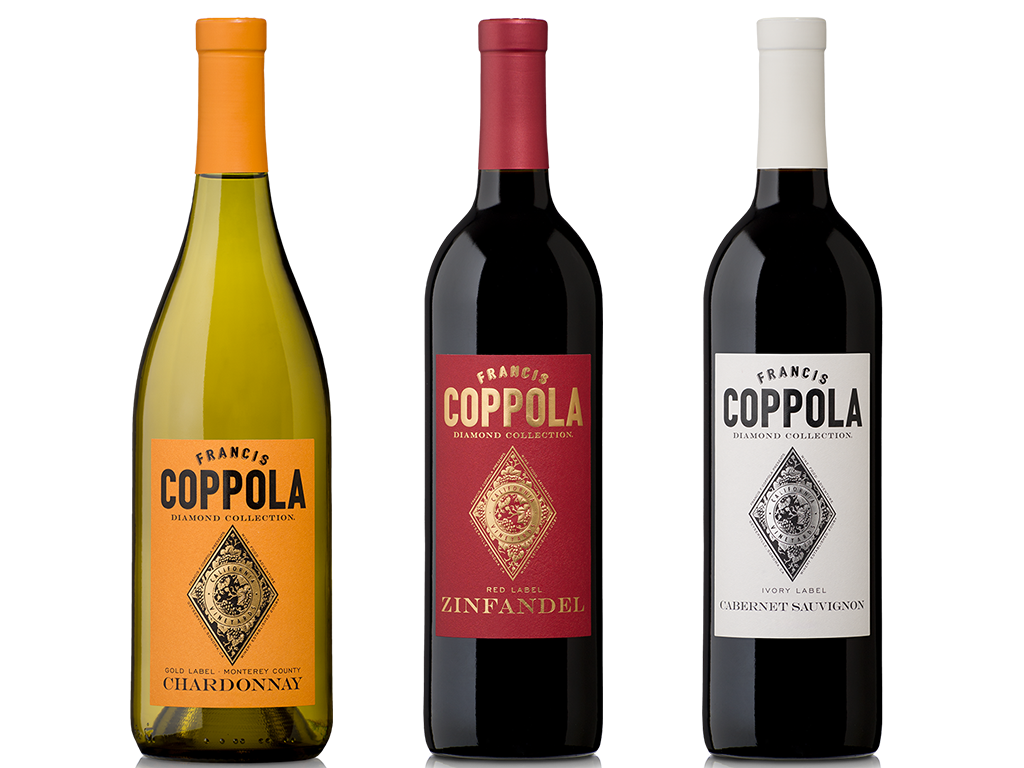 Diamond Chardonnay
Bright and balanced, highlighted by juicy apple, cantaloupe and pear flavours enveloped in a crème brûlée finish.
Our Chardonnay reflects the distinctive personality of Monterey vineyards, which give rise to juicy apple, guava and melon flavours.  Whole-cluster pressing and a combination of barrel and stainless steel fermentation ensures that the creamy texture and caramelised sugar finish is balanced by a crisp acidity.
Diamond Zinfandel
Alluring, easy-drinking Zinfandel with vivid California flavours of fruit and spice, made for everyday enjoyment. Its peppery characteristic creates a distinctive, complex flavour profile.
Diamond Cabernet Sauvignon
A powerfully complex wine with a classic flavour profile and youthful maturity. Debuted with the 2006 vintage, the first year our wines were produced at the Sonoma property.

Sofia Rosé is a wine of unparalleled beauty. From its shapely, stylised bottle to its delicate fruity essence, this is a wine like no other. When served chilled, its refreshing style makes a delicious partner to light summer fare and savoury hors d’oeuvres. Feminine and stylish, with a fragrant perfume of wild strawberries, cardamom and lemon peel, this rosé is lively and balanced with succulent flavours of tangerine and a hint of stony minerals. 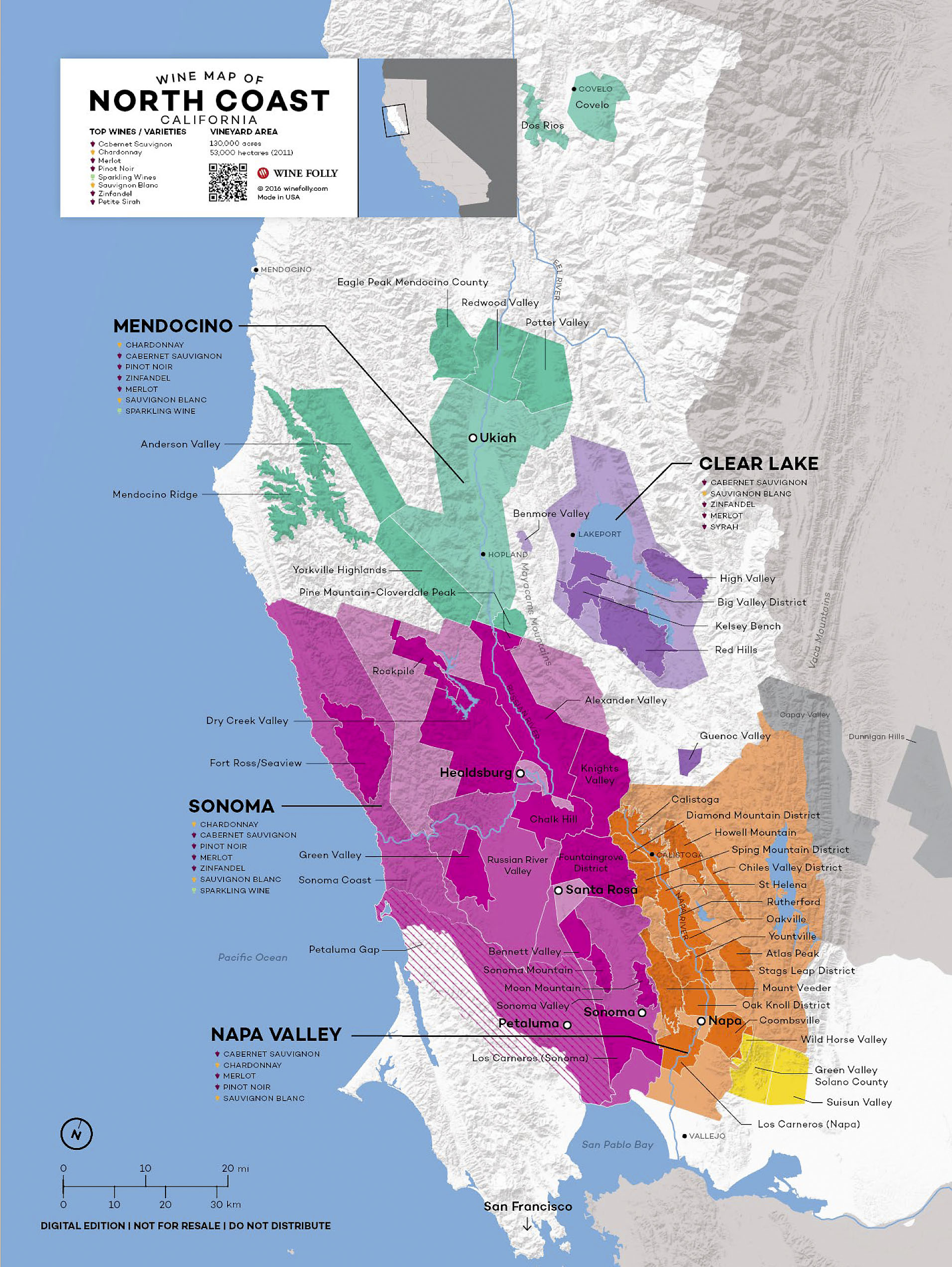 California is the United States’ largest and most important wine-growing region. Around 90 percent of the country’s wine production comes from here, resulting in wines which could hardly be more diverse due to the region’s widely differing climatic zones. Along the Pacific coast, California’s vineyards stretch over 1000 kilometres from north to south. Because of this vast expanse, viticulture takes place in a wide range of soil and climatic conditions.

The climate zones are divided into five regions (numbered 1 to 5), from cooler areas comparable to wine-growing regions such as Burgundy, Loire or Moselle, to regions similar to Bordeaux or Tuscany and hot regions like those of central Spain or even North Africa. This regional classification is quite controversial, and therefore the so-called AVA classification is often used.

A total of 320,000 hectares of vineyard area in California

There are more than 100 of these “American Viticultural Areas” making this classification more meaningful and reliable. It splits California into five major regions (Central Coast, Central Valley, North Coast, Sierra Foothills, and South Coast), each of which is further divided into smaller AVAs.

Chardonnay and Cabernet Sauvignon dominate Californian viticulture, covering more than 30,000 hectares of vineyards. Colombard, Merlot, Pinot Noir, Sauvignon Blanc, Shiraz and Zinfandel also play a prominent role. In addition to wine grapes, the Sultana table grape variety is also notable in California and is cultivated on about 30,000 hectares. Altogether, California has a total vineyard area of about 320,000 hectares, of which about 200,000 hectares are used for viticulture.